This chapter is from the books:

The Art and Craft of Biblical Preaching 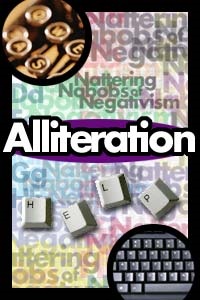 In that same vein I say: Four things can happen when you alliterate, and four of them are bad.

Alliteration is the literary device of repeating the same initial sound or letter several times in close succession: conspicuous consumption, or nattering nabobs of negativism.

Preachers most frequently use alliteration in the major points of their outline.

Sometimes alliteration is appropriate and effective in a sermon outline. Succinct and accurate words can crisply communicate the concepts of a short outline. For example, " Today we're going to look at the cause and the cure of our problem. "

Four things can happen when you alliterate, and four of them are bad.

But when a sermon outline has more main points, alliteration runs the risk of four bad things.

First, alliteration may cause the speaker to use a word nobody knows, and thus be unclear. To sustain the same letter, the speaker searches thesaurus. Unfortunately the only word that accurately conveys concept is a word few listeners are familiar with:

The outline may accurately convey the text, but it is unclear to the listener.

Alliteration runs the danger of changing the biblical author's meaning. Speakers who resolve to alliterate with only familiar words may manipulate the true meaning of the text to remain intelligible to the listener. The outline may be clear, but now is biblically inaccurate.

Cooperative, consistent and careful do not accurately reflect what is happening in the text. Obedient, persistent, and wise come closer to describing David's actions in those verses.

Worse than changing the meaning of a small paragraph within the text, alliteration sometimes violates the author's entire flow of thought as the speaker turns the biblical progression of ideas into an artificial, David-Letterman list of parallel points.

It is doubtful the author of 1st Samuel said to himself as he came to chapter 17, I will now write about the seven characteristics of leadership. Such an approach to preaching is far from the intent of the author, which was to show that a young man from the tribe of Judah, believing the covenant promises of God, finished the task God gave his tribe by removing the uncircumcised from Gath, thus qualifying himself for leadership among God's people.

Alliterated, list-preaching not only can violate the author's theological intent but also can present supposed truths that are contradicted elsewhere in Scripture. In contrast to the above list, abundant examples could be found of biblical leaders who were uncooperative (Peter refusing the Sanhedrin), inconsistent (Joshua changing strategy at Ai), fearful (Gideon preparing for the Midianites), rash (Jonathan charging the Philistine outpost), and uncertain (Daniel's friends explaining to Nebuchadnezzar their refusal to bow to a statue).

Alliteration runs a third danger. It may suggest that the most important thing in the message to remember is the outline.

What listeners really need to get is the central truth and its relevance for their lives. They should walk away from the message not with an outline but with an awareness of how a biblical truth bears upon life. Their minds should be engaged not with " points " but with how they are going to think or act differently in some concrete way.

Worse yet, the alliterated outline all too often communicates no content. If listeners do manage to remember it, they still don't know anything.

Taken from 1 Thessalonians 1:4-8, the message conveys the following thoughts:

But you can't access any of these thoughts by remembering the outline. The alliterated outline terms are unnecessary middlemen the listener must jump over to form the concepts in mind.

If remembering the outline is important, a set of points that is not alliterated but full of content — that is, written in complete declarative sentences — would be more effective:

The final bad thing that can happen when we alliterate is our listeners' attention may be drawn more to our cleverness than to God's Word. They may appreciate our skill more than they absorb God's message.

The words of an ancient divine still ring true: " No man can at one and the same time give the impression that he is clever and that Christ is mighty to save. "

Of alliteration, we could say:

It seems better, though, to say:

Previous: Lifeblood of Preaching Next:

The Preacher As Sermon