How to Preach Your Best Christmas Sermon Ever

How to Preach Your Best Christmas Sermon Ever

Our Christmas sermons ought to have a base, trunk, branches, lights, and a star.
Anthony Delaney
Image: Pearl / Lightstock

Christmas will still afford the best opportunities for people to visit our churches, even if it is online. So what do we do when they come or watch? How can we connect them to Christ? I still believe that it’s not too late, and if we are friendly and hospitable, invest in relationships and invite our friends in community along to join the party, this Christmas can be a huge growth opportunity, again yes, even as many of us are still worshipping apart.

For most of us, our part will be to preach a message. The Word became flesh, now he will use our flesh and words to make his home with people again. What a great privilege! What a holy mystery!

I was writing some ideas for those speaking at Ivy’s many events this Christmas and decided to share them here with you. I hope it’s helpful.

First, you’ll start with – A TEXT.

It could be a narrative story from one of the characters in the Gospel stories. I usually find that works best for visitors, as stories are universal so I will most likely cut to one of the Nativity characters anyway this year even though our theme is based on the names of Christ listed in Isaiah’s prophecy.

Then try to summarize it without looking at it. I ask three simple but deep questions from the text:

Learning to properly handle a text and not misuse its meaning (i.e. just hanging your own stories on it, rather than bringing out the actual meaning) is such important work.

After you have read it, meditated, or ruminated on it, talked with some people about it, asked what Facebook thinks about it … read it again. Before long I usually find that I have way more to say so it’s difficult to determine what makes it into THIS sermon. But scribble it all over some big pieces of paper and edit later.

Second, you’ll also have a CONTEXT

The first is the people “back then.” This bit of the Bible is of course part of a chapter, in a book, in a library of 66, describing things that actually happened thousands of years ago to real people. It’s written by real people, to other real people. Dig into that context. It’s fun, and you’ll understand so much more than if you just grab a line by itself without looking at what comes before it and after it, and what the people who first read it would have made of it.

The other context is the people in front of you. The glorious thing is at Ivy we have so many different people in different places, and this month more than ever we’ll ask them to trust us enough to invite friends and family, because if ever they are going to say “Yes,” to coming or watching the sermon, it’s at Christmas time. So you had better preach as if there ARE seekers there, then people will know it’s okay to bring them. And when they listen they’ll find out you were expecting them because you won’t talk over their heads but to their hearts.

Check out what you’re intending to say a few times for Christian jargon. Maybe you could ask someone who doesn’t go to church, “Hey they’ve roped me in – can I read this through to you – just so I won’t assume anything, I don’t want to preach to the choir.” (Oops, I just did it!?) They may even agree to come along when you do it live!

From a communication perspective, you have to consider who the listeners are. How much they need to know now? How much can they handle during this 20 minutes? (You can go longer but you’d better be GOOD if you do! Remember the old adage: if you don’t strike gold at first, stop boring!) Get all the info you can for sure, but don’t try to unload it all. There’ll be other sermons!

It’s disheartening to realize quite often when I’m finished that people can’t remember most of it. But then by Boxing Day (the day after Christmas) I’ve forgotten most of it too, so I can’t complain too much. If I try to tell them everything to sound like I have something interesting, well I used to like it when they said, “That was deep …:” but now I know it means, “I didn’t get it, I won’t remember it, and I have no idea what to do with it!”

That does not mean losing the richness of the God-inspired material or the message. Rather, it means you do the hard work of thinking and praying and simplifying what you want to accomplish with this sermon, in this setting—instead of hoping your hearers will. (By the way, they won’t.)

At Ivy we preach in a series, because that’s the best way to see life transformation. This approach frees me up to remember: I don’t have to do it all this Sunday! But you do have to know what God wants this sermon to do. If you don’t know, they won’t guess. So be CLEAR. As you prepare, keep asking: what will this sermon motivate people to think or believe, to reject or embrace, to give or to get?

If it is to inspire them, it has to ignite something in you first! Remember you are not just here to transmit information but to transform eternities. Your sermon must have a job, to do the job. 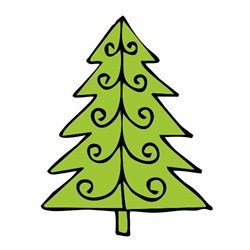 Here’s a helpful image that I use in my sermon prep as I structure my Christmas sermons:

This will usually be the TEXT itself. The passage or verse. You could start here, or bring it in later after you have described a problem, asked a question, told a related story, or stuffed a turkey (just trying to see who’s still reading here). If the base you build on is not from the Bible, this is just your blessed thought and I could buy a box of crackers instead, thanks. What is the TRUTH of God’s Word for us today?

Coming from the Bible you have identified a central gospel truth. ONE is good! The ONE thing you absolutely definitely MUST get us to get, so that we can DO the Word and not just be hearers deceiving ourselves. This is the hardest and most important part! Can you summarize this in a memorable statement? Something short enough to go on Twitter. State the concept/ call to action, if you don’t tell us we won’t know.

You’ll have a few BRANCHES that come off that trunk, make sure they are attached. These are your sub points. They could be stories or explanations. You really don’t have to have three points. That’s not in the Bible. I have heard sermons that said they had ten points but ended up with me thinking there was no point listening.

Make sure you add some LIGHTS on the tree. Illustrations to shed light on the gospel truth, rather than distract away from it. How many times did you hear a great story and remember it but have no idea afterwards why it mattered or what it illustrated?

Finally put a STAR on top. This is how you call us to action! I usually pepper the call to action throughout the talk in various ways to give people time and the Holy Spirit space to open their hearts to respond in the way that’s right for them. So what is it? To become a follower of the One who made a star stop over his cradle? To trust like Mary? To dream again like Joseph? To sign up for Alpha and investigate further like the wise ones who followed that star?

Make it bright. Make it clear. Make it compelling. Make it actionable. What do you want us to do now? To come back again next year for the new series which will help make the rest of your life the best of your life now that you have found out who Christmas is really all about? Great! How do we sign up?!

Anthony Delaney is a Leader at Ivy Church in Manchester. He is also the leader for New Thing and the LAUNCH conference. He is an author and hosts the television show “Transforming Life.”

A Video Interview with Kevin Miller

4 tips for thriving during this Christmas season.