In When God Whispers Your Name, Max Lucado writes:

I rolled out of bed early—real early. I'd been on vacation for a couple of weeks, and I was rested. My energy level was high, so I dressed to go to the church office. My wife, Denalyn, tried to convince me not to go.

"It's the middle of the night," she mumbled. "What if a burglar tries to break in?"

Most experiences can illustrate something if we try different angles.

There had been an attempted break-in at the office a few weeks previously. [Ignoring my wife's concern, I drove to the church,] entered the office complex, disarmed the alarm, and then re-armed it.

A few seconds later the sirens screamed. Somebody is trying to break in! I raced down the hall, turned off the alarm, ran back to my office, and dialed 911. After I hung up, it occurred to me that the thieves could get in before the police arrived. I dashed back down the hall and re-armed the system.

"They won't get me," I mumbled defiantly as I punched in the code.

As I turned, the sirens blared again. I disarmed the alarm and reset it. I walked to a window to look for the police. The alarm sounded a third time. Once again I disarmed it and reset it.

Walking back to my office, the alarm sounded again. I disarmed it. Wait a minute; this alarm system must be fouled up. I called the alarm company.

"Our alarm system keeps going off," I told the fellow who answered. "We've either got some determined thieves or a malfunction."

"There could be one other option," he said. "Did you know that your building is equipped with a motion detector?"

Then the police arrived. "I think the problem is on the inside, not the outside," I told them, embarrassed that I was the culprit setting of the alarm.

Am I the only one to blame an inside problem on an outside source?

Alarms sound in your world as well. Heaven knows you don't silence life's alarm by pretending they aren't screaming. But heaven also knows it's wise to look in the mirror before you peek out the window.

Take in a book or sermon by Max Lucado or John Ortberg, and it's hard not to envy. Somehow they transform the daily experiences we all have into illustrations that are not only inspiring and delightful, but also pregnant with spiritual truth.

Obviously John and Max have enormous God-given talent, but that talent includes skills any preacher can develop. Here are seven core skills for turning the experiences of daily life into illustrations that illumine Scriptural truth.

John Ortberg refers to the habit of continually searching for illustrations as always having his antennae up. We search all the channels of daily life. Once we develop the habit, it's second nature; our instincts sense an illustration automatically.

To develop this habit, begin a discipline of pausing every 30 minutes to scan that period. The search may last 30 seconds. Search the internal world of what you have been thinking and feeling (strong feelings nearly always signal illustration potential). Search the external, physical world for potential metaphors. Search people's interactions.

Don't concern yourself immediately with whether or not your find illustrates something; just notice what is interesting. If nothing stands out, identify the human situation: a first-time mother struggling to care for a newborn, a worker racing to get to the office on time, a leader under attack. Such ordinary situations often supply the brief illustrative bridges we use to introduce the relevance of a Scripture. If nothing else presents itself, simply scan sensory data: the sound of a fellow worker's footsteps, the smell of old furniture, the lingering taste of breakfast.

The last step in developing the habit of observation is recording what you find. Keep a hard-copy journal nearby, or have a Word file open on your computer all day as a log where you briefly jot the fruit of your sifting every 30 minutes. Write just a phrase and a few topic words. One of my recent entries was: "Utilities worker scans the sidewalk for gas line with a scope. Discernment, vision, test, secrets."

The Pyramid of Abstraction

The second fundamental skill for illustrating like Max and John is the ability to work intentionally with the pyramid of abstraction. With this simple yet powerful model, we can turn virtually any experience into an illustration.

Here's how it works. In the figure below, notice how the words proceed from bottom to top in a movement from specific and concrete to general and abstract. Each step up the inverted pyramid is a broader category. 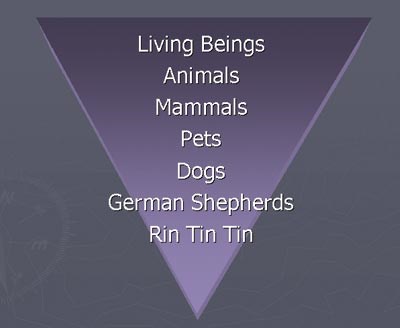 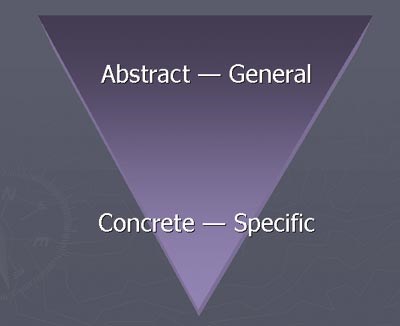 We can run the same sort of progression with our daily experiences to find illustration topics.

For example, I was sitting recently at the park on a summer day enjoying a few hours off. Nearby, several robins were hunting for a midday meal. I paused to really observe. As I did, it struck me that these innocent-looking birds, which symbolize the beauty of nature and the return of spring, are in reality vicious killers. They hop along in the grass, pause cutely, cock their heads, and stare at the ground. Then they pounce on their unsuspecting prey, savagely pounding their beaks like jackhammers into the soil, sending dirt flying until they seize the unarmed father or mother of many baby worms and mercilessly snip it into pieces. With a slurp, the robins gobble up their still-writhing victims. But their bloodlust is not satisfied. They are serial killers. Without remorse, they hop off to repeat their brutality.

What does this scene illustrate? How does this red-breasted Rambo line up on the pyramid of abstraction? I would begin by brainstorming possible subjects: finding food, eating, hunting, surprises, killing, provision, appearances, false impressions, assumptions, cruelty, daily food, daily needs. Then I would begin low on the pyramid with specific, concrete subjects. I would move up the pyramid filling in words already brainstormed and adding others as they came to mind, proceeding to ever broader generalities until I found a subject that had relevance for preaching. 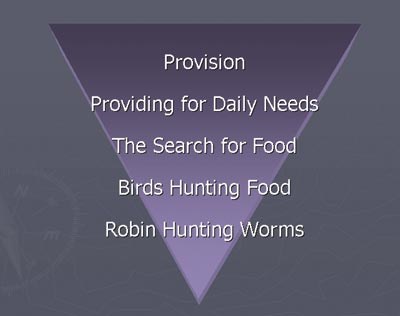 Once we reach a level of abstraction that has relevance for preaching, we often will want to reverse direction and press down again for concrete specifics in that parallel area. 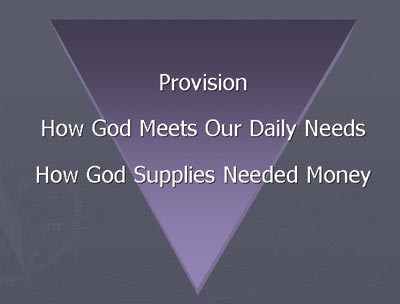 If I told this story in a sermon about God's provision, I could bridge from it in this way: "Have you ever felt as though you had to be a little heartless, or selfish, to make a living?"

Most of our daily experiences can yield several different lines of thought on the pyramid. Here is another angle on the robin, this time focused on my perceptions. 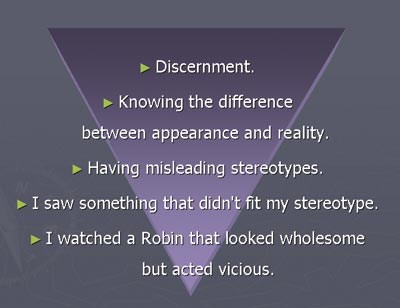 In a message on spiritual discernment, I could tell the robin story and then bridge in this way: "Things are not always what they seem … ."

As these examples show, most experiences can illustrate something if we try different angles and go high enough on the pyramid. Though I don't actually write on a pyramid when I think about illustrations, I do intentionally think about moving between what is specific and what is general, and am aware that several steps can be involved as I move in one direction or the other.

This is part one of a three-part series. In part two, Larson discusses the importance of using keywords, storytelling devices, and different forms of speech when crafting an illustration.

Craig Brian Larson is the pastor of Lake Shore Church in Chicago and author and editor of numerous books, including The Art and Craft of Biblical Preaching (Zondervan). He blogs on Knowing God and His Ways at craigbrianlarson.com.